Further to numerous articles which have appeared in various newspapers throughout Quebec regarding the conflict between the Union des Producteurs Agricoles (UPA) and the government of Quebec, the Fédération des clubs de motoneigistes du Québec (FCMQ) wishes to express its extreme discomfort via the two parties involved in this conflict, notably as both are important and vital partners. The FCMQ has neither the expertise, nor the knowledge to take side in this conflict, nor any desire to make any judgement in the matter. The FCMQ is beholden to agricultural producers for the integrity, interconnectedness and sustainability of our trail network, while also to the government of Quebec for the financing of its operations and activities, this via the rebate collected from snowmobile registrations fees and redistributed to the Federation and member clubs through financial aid programs.

Snowmobile safety is a primary and constant preoccupation for the Fédération des clubs de motoneigistes du Québec (Quebec federation of snowmobile clubs, or FCMQ). This is precisely the reason behind the FCMQ’s decision to ally itself with International Engineering & Manufacturing Inc., better known by its trade name Woody’s, for the launching of a new safety campaign geared to promoting and encouraging stud use on snowmobile tracks. Based on the theme “Snowmobile safety... get a grip!”, the campaign espouses the virtues of these safety enhancement devices which have been proven in numerous studies and whose use is endorsed by industry experts. Offering unrivaled traction in icy and low-grip conditions, stud use is a reliable and sure safety investment for all snowmobilers, notably in a world in which trail conditions are increasingly icy and unpredictable. 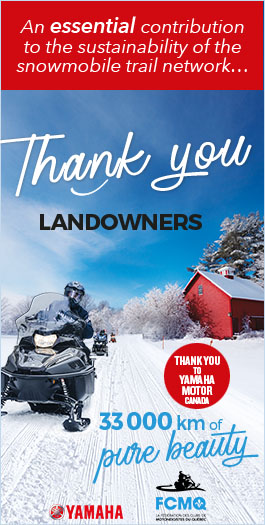