Further to numerous articles which have appeared in various newspapers throughout Quebec  regarding the conflict between the Union des Producteurs Agricoles (UPA) and the government of Quebec, the Fédération des clubs de motoneigistes du Québec (FCMQ) wishes to express its extreme discomfort via the two parties involved in this conflict, notably as both are important and vital partners.  The FCMQ has neither the expertise, nor the knowledge to take side in this conflict, nor any desire to make any judgement in the matter.  The FCMQ is beholden to agricultural producers for the integrity, interconnectedness and sustainability of our trail network, while also to the government of Quebec for the financing of its operations and activities, this via the rebate collected from snowmobile registrations fees and redistributed to the Federation and member clubs through financial aid programs.

The FCMQ recognizes the UPA’s right to make demands and act to defend its members’ interests.  It also supports the UPA`s demand to delay the implementation of the agricultural land tax reform without, however, being in agreement with the pressure tactic used, that is the closing of snowmobile trails.  Volunteer snowmobile club administrators will respect the decision made by agricultural producers in so far as withdrawing land use permission, but at no time will trail closures be initiated by member clubs.  While the FCMQ supports agricultural producers’ efforts to arrive at a negotiated settlement that is satisfactory to all concerned parties, it does not, however, endorse the closing of snowmobile trails given that its mission and primary mandate is to offer snowmobilers, from within and without Quebec, access to a 33,000 km trail network maintained by its 200 member clubs, which are not-for-profit bodies administered by thousands of volunteers, such as to ensure the network  its quality and safety.

Closure of snowmobile trails on UPA member lands would result in significant negative impact to this important economic winter tourism activity which provides more than 14,000 jobs annually, in addition to billions of dollars of economic benefits for the province.

Agricultural producers are important and essential partners who voluntarily and freely provide access to snowmobile club volunteers so that they may maintain trails on their property and thereby permit snowmobilers to travel on their land. The FCMQ is extremely grateful for their contribution for without their willingness to support regional economic development the interconnected provincial trail network could not exist.

If we all seek to profit fully from the benefits that this winter activity brings to Quebec, all concerned parties will have to act collaboratively in order to maintain the gem that is our provincial trail network. It is now one minute to midnight and the FCMQ supported by its 90,000 members ask the provincial government to sit down with the UPA and negotiate in good faith in order to reach a mutually acceptable solution.

Thanks to all of you, volunteers, landowners, as well as all the various bodies and government ministries which have participated and contributed to this wonderful adventure for the past forty-two years.

The Fédération des clubs de motoneigistes du Québec, a sectorial tourism association, is a not-for-profit organisation that has been serving its members for more than 42 years.  It is dedicated to the development and promotion of safe snowmobiling throughout Quebec. The FCMQ defends the interests of its 200 member clubs and their 90,000 individual members.  More than 4,500 volunteers contribute in excess of 800,000 hours annually towards the maintenance of the provincial snowmobile trail network.

For additional information:
Marilou Perreault: maperreault@fcmq.qc.ca or by phone at (514) 268-2649

PDF version of the Press release 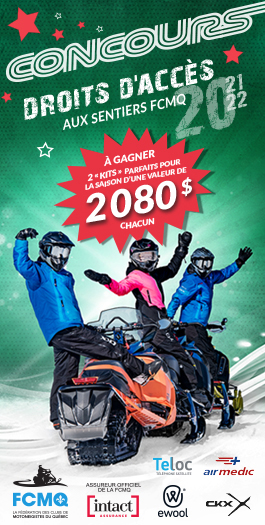