More than 3600 snowmobilers were stopped on the trails.

“Our objective was to raise awareness about safe snowmobiling practices with the snowmobiling community. During International Snowmobile Safety Week, trail wardens, as well as officers from the Sûreté du Québec, were present on the trails, in clubhouses, in licensed establishments, indeed anywhere we could help get our message out”, notes Marilou Perreault, responsible for media relations at the FCMQ.

Efforts to raise awareness by the FCMQ and its partners focused on various themes, including respecting the speed limit and stop signs at trail and public road crossings, caution on waterways, as well as the prohibition against driving under the influence of alcohol or drugs.

More than 3600 snowmobilers were stopped during Safety Week, more than 100 warning were issued by FCMQ trail wardens and over 5000 km of trails were patrolled in order to improve snowmobile safety.

Trailside checkpoints and meeting with snowmobilers
A collaborative effort between the ministère des Transports du Québec, the Sûreté du Québec, trail wardens and other partners, trailside checkpoints were set up in various regions throughout Quebec on Sunday, January 20th, providing a great opportunity for snowmobilers to obtain information about safe riding practices.

Race driver and automotive journalist Bertrand Godin, snowmobile safety spokesperson for the FCMQ, also got involved, meeting up with snowmobilers to discuss snowmobile safety. The event was deemed an unqualified success despite the cold weather.

Remarkable work of trail wardens
To ensure safe snowmobiling throughout the season, and not only during Safety Week, the FCMQ is pleased to count on the dedication and work of over 1,200 volunteer club and provincial trail wardens. These individuals receive refresher training annually, thereby allowing them to keep their skills and knowledge up to date. “They do remarkable work and cooperate with various police forces to ensure the safety of trail users,” concludes Mrs Perreault.

2019 Edition of the Open House weekend
The FCMQ organized its annual Open House weekend on January 19th and 20th, allowing snowmobilers to ride its 33,000 km trail network without having to purchase a trail permit. The event was a tremendous success again this year as more than 16,000 people signed up. With 3,650 registrations from other Canadian provinces and 735 coming from the USA, the event is a significant tourism draw.

In Quebec, the snowmobile industry generates more than $ 1.9 billion in annual economic activity during a season that lasts only a few weeks!

Thousands of enthusiasts
This winter, over 100,000 enthusiasts will take pleasure in riding the 33,000 km trail network located throughout the province. With the long-term health and sustainability of the industry intrinsically tied to the safety of said trail users, these promotional activities are essential.

Throughout the snowmobile season, the FCMQ continues to promote safe and responsible snowmobiling via social media, in Motoneige Québec magazine, its newsletter and on its Website. Snowmobile safety PSAs with Bertrand Godin are also broadcast during the Motoneiges.tv television show on the TVA Sports network. All means possible are utilised to raise awareness about safe snowmobiling practices.

About the FCMQ
The Fédération des clubs de motoneigistes du Québec, a sectoral tourism association, is a not-for-profit organisation that has been serving its members for more than 44 years. It is dedicated to the development and promotion of safe snowmobiling throughout Quebec. The FCMQ defends the interests of its 200 member clubs and their 100,000 individual members. More than 4,500 volunteers contribute in excess of 800,000 hours annually towards the maintenance of the provincial snowmobile trail network.

PDF version of the Press Release 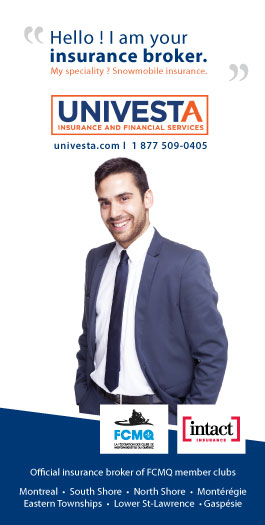